Last week I was in England (where the temperatures were actually hotter than Los Angeles!) and I thought I’d share some pics from my trip. The first ones are from my home town of Watford in Hertfordshire, which is about 15 miles north of London (and very close to Warner Bros Studio London, home of the famous Harry Potter tour).

I read a story that mentioned Jackson Jewellers on the Parade in Watford High Street (or what American would call “Main Street”) was haunted, so naturally I went in there to investigate.

I spoke to David Jackson, the third-generation of the family, and he told me the building was built in 1480 – as you can probably tell – and that the shape of the hearth and chimney were still there (as you can see in the picture).

It felt (and smelled) like a very old place, what with the silver, the antiques, the quiet atmosphere and the chiming clocks, and one of those clocks even had it’s original receipt from 1888 – the year Jack The Ripper was killing prostitutes in the East End of London.

As for the ghost, David explained that there used to be a restaurant upstairs – and as soon as he said that I had a flash of my childhood; we used to go there for lunch sometimes! Talking to my mother later, she remembered the restaurant’s name: The Copper Kettle (and she told me that her engagement and wedding ring both came from Jackson’s!).

As for the Elizabethan ghost, that turned out to be “fake news”. The restaurant owner HAD said that he “always felt as if there was someone or something moving around in the dark” when he was there late at night, but that was about it! Either way, I’m glad Jackson’s are still around! 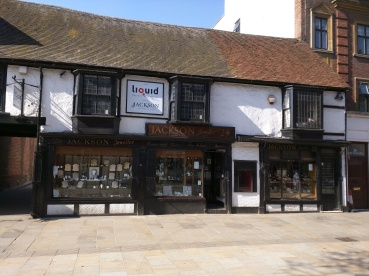 Some of their old clocks

Underneath this one is it’s first receipit from 1888 – and it’s still working!