Today what was the Bella Napoli Café on N. Vermont Avenue is a laundromat with a Papa John’s pizza restaurant, so it didn’t really qualify for Gourmet Ghosts 2 – we really prefer unusual or unique restaurants, and a chain doesn’t quite fit the bill.

Nonetheless, this is a good example of how buildings or places that seem quite innocuous today have actually often had an interesting – and deadly – past.

Back in 1933, this was where you found the “quiet and fashionable” Bella Napoli Café – though during a busy dinner hour on August 28 it rang to the sound of bullets and a double murder.

According to the LA Times, three “swarthy gunmen” strode in with “their hats pulled down over their eyes,” cornered a couple of victims who were sitting in a booth, and opened fire.

The “deadly fusillade” – multiple bullets from automatic pistols – “tore through the heads and necks” of the victims, and induced “horror and panic” among other diners. Police immediately indentified one of the victims; Harry Mackley (AKA Abe Frank), a hat store owner from New York. Later, the other was announced as Fred Kitty (AKA Fred Harris and Fred Keller).

Both victims were described as being Italians, about 30 years of age and “immaculately dressed,” and the newspaper was strongly implying this was reprisal for a mobster hit in New York in June the previous year.

“Let’s get out here,” the leader of the murderous trio said, and right outside they were met by a large black sedan in which they made their getaway.

The “murder tableau” had been enacted in just three minutes, and within a few days the guns had been found in a drain and the LAPD had made many arrests and charged several “New York hoodlums” with the murders…..

The restaurant did its best to get back to normal…. 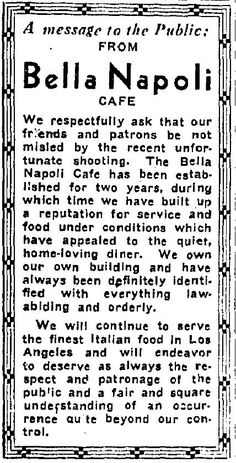