I had written a whole entry for the Kawada Hotel, but it got cut from Gourmet Ghosts 2 at the last minute – so here it is now! 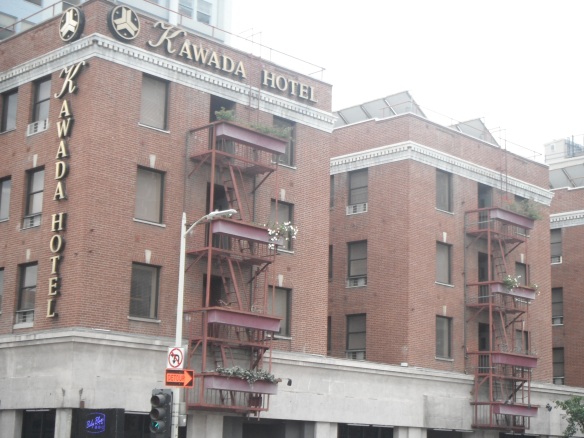 Operating as a mid-budget hotel, the unobtrusive Kawada has had a central spot in downtown on South Hill Street for nearly 100 years, and is a great spot especially if you’re a visiting tourist.

It’s close to Grand Central Market, Disney Hall, MOCA and the Broad Museum, while the building is also home to the cheerful Cherry Pick Café. During the day the Cherry Pick offers a large selection of pizzas, deli sandwiches, coffees and smoothies, and stays open until early evening.

Though its windows are covered with signs and pictures of food, inside it’s actually a little hidden treasure: brightly lit, green sofas, silver tables, a large display case of pastries, cookies and cakes, and always plenty of office types at lunch – you can even buy coffee mugs with positive slogans written in Chinese on them!

Years before in the space on the opposite side of hotel there was a restaurant called Epicentre, which opened its doors in August 1991.

Believe it or not it was earthquake-themed, and opened just a few years after a real quake in Whittier Narrows in the San Gabriel Valley, which caused $350 million worth of damage and took eight lives.

The restaurant wasn’t as over-the-top as something you might see in Las Vegas though, but it did have walls that looked cracked, a map showing California falling into the Pacific, an artwork of City Hall – before and after an imagined temblor – and an open ceiling showing exposed wires and ducts (before it was fashionable).

Though the menu was somewhat standard – fish, chicken, pasta and steak – they did have some fun. You chose from a list of “epitizers” and desserts were called “aftershocks,” while a curry’s strength came on the Richter Scale: 1.0 for mildest, 10.0 for the spiciest.

The archives tell us that this hotel was built in 1922, though back then it was known as the Astor Hotel. It had no connection with the famous New York hotel – or family – but was doubtless one of the many around America that used the name to infer opulence.

V.J. Thomas Lee, the owner of a stock brokerage house and a theoretical physicist, had paid $1.3 million for what was then known as the 118 unit Astor Apartments, but there were bigger changes coming, as a 1988 article in the LA Times made clear.

Now it was owned by the Kawada Investment Co, the Astor was being upgraded and expanded, and Levi Velasquez’s barber shop – one of a number of businesses on the block – was closing to make way for the new development.

But the Astor Hotel had plenty of stories to tell before it became the Kawada.

Leonard Efanti, 25, had arrived in Los Angeles two weeks ago from Chicago, and had taken a room at the Astor – which was right near the Water and Power building. He had three visitors while at the hotel – three men who matched the description of those who had carried out the robbery with him. Police also alleged that he had he observed the target building for days before the gang’s robbery took place in broad daylight.

Efanti, who registered as J. Eads, left the hotel without his luggage, but then later a torn curtain from his room was found in the alley behind the Water building and he was arrested.

Then, the February 1, 1940 edition of the LA Times reported on a deadly card game that took place in one of the rooms here.

Frank Urena had been shot and killed when bus boy Demetrio Palay grabbed Urena’s gun and opened fire, the bullets also hitting Paul Areola, who was in a critical condition. Palay, 25, was in custody on suspicion of murder and attempt to commit murder, and had been tackled to the sidewalk by Morrey Kline, who worked for the Los Angeles Evening Herald-Express.

Palay said he had won $500 from his card rivals in a previous game, and claimed self-defense. When he had won another hand “Urena drew a pistol and Areola grabbed my money,” he said.

As the struggle began, nurse Katherine Kershaw ran from the room and hid for five hours before being found – though she didn’t see who fired the fatal shots.

Finally – as far as the records show at least – in March 1958 the man who registered himself as “George Andrews” was found dead in his room here.

Also, there is something else – something unusual and rather famous – right across the road from the Kawada, and it was built at the same time as the hotel.

Known for its appearances in movies including Blade Runner, The Terminator, Independence Day, Con Air, Gattaca, Kill Bill and many more (to say nothing of hundreds of car commercials and pop videos), the brightly-lit white-shell curving 2nd Street tunnel is perhaps L.A’s biggest secret star.

You’ll know it when you see it, that’s for sure, but like the 3rd Street Tunnel (featured in Gourmet Ghosts – Los Angeles) it too came with a death toll.

Like most municipal projects it spent years in the planning and many weeks in the courts and the press being debated and criticized by both sides.

Planned to relieve heavy traffic from that 3rd Street Tunnel, it was controversial from day one; even the white tiles, which came from Germany, ruffled feathers because WWI had only ended a few years before. There were even (rejected) plans for a moveable sidewalk inside too.

A couple of thousand people turned up to see the first digs of earth on his then-huge bore project in April 1921,  though early the next year there was the first (and inevitable) accident.

A hundred tons of earth, rock and timbers slid down the west end of the tunnel trapping six workmen – two of whom were buried alive. One of them, Jesus Venzula, 32, was buried up to his neck, and with serious injuries that the LA Times said “probably will cause his death.”

Just over a year later in August 1922 there was another cave-in when two workmen were badly injured, but there were no other major incidents after that, the tunnel opening to much acclaim and applause in July 1924.

If it’s nighttime, check out the tunnel – it looks amazing lit up in the dark.