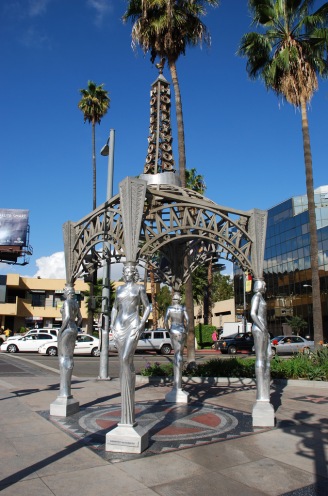 Standing guard as a kind of semi-official gateway to Hollywood, The Four Ladies of Hollywood is a piece of public art created in 1993 by Catherine Hardwicke as a tribute to the multi-ethnic women of Hollywood.

Striking in silver, it has representations of Dorothy Dandridge, Anna May Wong, Dolores del Rio and Mae West all holding up an obelisk-topped dome, with a small weathervane-style sculpture of Marilyn Monroe in her famous pose from The Seven Year Itch (1955) on top.

Just yards from this sculpture is the Emerson Theatre, a (seemingly) currently closed nightclub with broken bulbs on the sign, but in the past a real theater that saw many hopefuls – and maybe a few stars – tread the boards here.

At one time it was called El Patio, and its 800 seats were heralded in the LA Times of January 21, 1949 when it saved the Nine O’Clock Players latest show Let Us Be Gay, which had been hastily-rescheduled not once but twice, but was now going to open here.

A year before – though it didn’t hit the newspapers  until September 1950 – the El Patio was at the center of a “lonely hearts” club scam, where the unfortunate victim Mrs. Claude J. Neal, 55, was conned by George Ashley into signing several checks for a total of $17,500.

Ashley said he wanted the money for a deposit in advance of buying the El Patio, and even said she would be employed as the hostess there – but it was all part of several scams involving a number of people.

Though the married Neal said she had only joined the club to find friends, she did spend time with Ashley – though denied there was any romance between them.

Either way, Ashley was a cruel thief who threatened her with violence; he called her a “North Carolina hillbilly” and one time in his office, pulled out a gun and told her he didn’t want any more “monkey business.”

Neal went to the police after a frightening trip Ashley took her to at Nichols Canyon, where he pointed down the steep cliff and said:

“If I pushed you off there wouldn’t be one chance in 10,000 that your body would ever be found. Now, baby, you’d better fly right.”

Neal was one of an unlucky 13 woman who testified against Ashley and his co-defendants (one of whom was his son-in-law), while another victim was Ashley’s own wife, who was now suing him for divorce.

Much later in the life of this building – specifically in November 1974 – there was a nasty shooting at what was then the Hungry Tiger Restaurant, which had opened at a cost of $500,000 in 1968 (and is doubtless what’ today the Tiago Coffee Bar, located alongside the Theater and sharing the same address).

According to the LA Times, a patron dressed in a distinctive orange, two-piece satin suit complained that the lighting was too bright. An argument started between him and restaurant manager, but when the man struck the manager, waiter Herman Kuss, 39, tried to intervene.

The man then ran off up Hollywood Boulevard, exchanging shots with an off-duty LAPD Officer who witnessed what happened and (unsuccessfully) gave chase.

The man in orange got away, while Kuss was taken to hospital and his condition was described as “critical” – though there was no other archive information as to whether the charge became murder, or anyone was ever caught for the crime.

In recent years the Emerson was a club and music venue, but now it seems to be closed – many of the light bulbs on the sign are broken, and it looks rather creepy.

Indeed, for Halloween 2013 it was turned into a “Haunted Theatre” for a live-action scary event (plus a DJ), but now it seems the-then owners are no longer involved, and as such I didn’t find any ghost stories – though who knows what’s behind those closed doors now?

Alongside, Tiago is a “community-driven” coffee bar when you can get a breakfast, soups, salads, wraps, and of course plenty of java.

Since they’re at this end of the Boulevard they’re not mobbed with tourists, and my breakfast choice is their lemon ricotta hot cakes, which come with maple crème-fraîche and a choice of blueberries or bananas – but you must order them before 3pm.