I recently wrote about private libraries, and also researched the vanishing art of bookbinding. That part of the story didn’t make the cut but was really interesting (I think), so am listing it here – along with some great pics they sent me…..

California is a big market for rare books and personal libraries, and it’s also home to Kater-Crafts, a bookbinding company that was founded 66 years ago and, in an age where books are supposed to be dead, has actually suffered and benefitted from computerization.

Run today by siblings Mel, Judy and Richard Kavin, the Pico Rivera company has around a dozen staff, down from their 1960s peak of 100.

“We’ve just gradually downsized,” says Judy, noting that improvements in machinery and computerization have been a factor, and that textbooks, once a large part of their business, are now almost entirely available for e-readers. “But that’s good for the students; they weighed a ton and cost a lot,” admits Bruce, adding that “nothing we do is inexpensive.”

“Every day people tell us how much they still love reading books,” he says, noting that in the 1970s they used exotic skins like ostrich, elephant, whale and alligator to cover books, and that now animal glue is no longer used, the once-familiar smell in the bindery has gone too.

“It used to be a machinery jungle in here as well,” he says, but now there are just the occasional sounds of the sewing machine and the cutter.

Their main business now is specialized restoring and fine binding – all of it done by hand – and clients send pictures of their books via email to obtain an estimate. “The internet has got us customers who would never have known about us”, says Judy, and whether books need to be restored or rebound, Kater-Crafts has a two to three month waiting list despite binders working on several at a time “while the glue dries,” says Bruce.

Many of the jobs are personal, and the pair mentions everything from an EMT manual to family Bibles, photo albums, small editions, poetry, family histories and journals, nursery rhyme books, and mother’s old recipes and cook books, which are often just scraps of paper collected together. 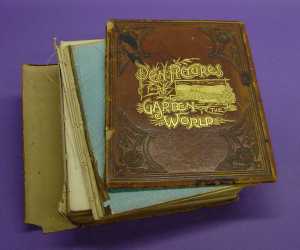 But even here, the virtual world is present: Bruce remembers a book they made of the emails of a romance between two people who met online, and one man who “wrote ‘I Love You’ a million times on paper, and wanted it bound.

Their biggest project was a 325lb guest book for the Los Angeles Chamber of Commerce. It dated from the early 1900s and had been flood-damaged, and “we needed a fork lift and four guys to move it,” says Bruce. 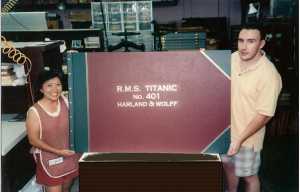 Special commission for the movie “Titanic”.

Nevertheless, while there are some huge bookbinding companies, it is something many people can do in their garage with some basic equipment, and Bruce says that few of their employees arrived with experience: “it’s more about a natural talent – an eye, a feel, a learning ability.”

In essence, binders will take an old book apart, clean it or repair it, and then glue it back together, the tools of their trade being plastic or white gloves, leather, PVA adhesive, sandpaper, razor blades, a knife or scalpel and the exotically-named bone holder spatula, a device that separates paper from backings.

Pesky curled, torn, crumpled or thin pages can require an iron, but how do they straighten dog ears? “Carefully!” laughs Bruce, revealing that you dampen it slightly with a moist sponge, then let it dry under weight. “No matter the job, it’s a time-consuming and intricate process.”

There’s a bookbinders dictionary on the shelves too, as the terminology can differ from the USA and Europe, where the skill goes back many centuries, and Bruce laughs sheepishly when he admits that the Guild of Book Workers Annual Seminar was held in Las Vegas last year.

Computer advances aside, it looks like bookbinding and bespoke libraries are set to be here for many years to come, and, as Bruce explains, there’s only one drawback to being a bookbinder.

“Bookbinder’s thumb. You use your thumb a lot, pushing and rubbing, and you develop muscles and calluses – almost superthumbs!” 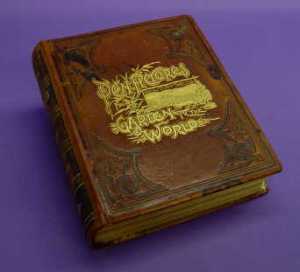