A favorite in Los Feliz for many years, the Rockwell is better known by the faded sign on their roof that advertises the previous restaurant – Sarno’s – but also perhaps by the tragic story that is linked to this address on North Vermont Avenue. 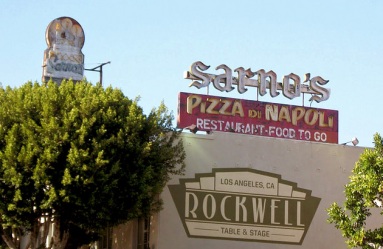 After emigrating from Italy to Chicago, Frances and Umberto Sarno moved to Los Angeles in 1946 and opened a bakery just like the one they had had in Europe. Soon a thriving family business among the local Italian-American community, it was here that eldest son Alberto became an excellent cake decorator – though it was something else that really called to him, as his brother Dina said in the Los Angeles Times in October 1987:

“One day he got up in the restaurant and sang opera. Everyone loved it. And he had discovered the vehicle to really do what he wanted to do in the world.”

The aspiring tenor left for Italy to learn about his love, but he struggled there – and on returning to Los Angeles didn’t find the critics any kinder – so in 1967 Alberto opened a tiny coffee shop next to the bakery, and, since the customers there loved his singing, named it Caffe dell’Opera.

He installed a stage, hired a piano player and fellow opera-loving waiters, and encouraged everyone and anyone to sing. Pictures of visiting celebrities like Sophia Loren, Tony Bennett, Mario Lanza and maestro Luciano Pavarotti lined the walls, and an eclectic mix of customers – and staff – soon made this a place you had to visit.

Alberto still pushed for success, producing a low-budget movie about an Italian opera star trying to make it big in America and trying his hand at operatic disco, while next door the bakery continued its success run under Dino’s leadership following Umberto’s death in 1974.

But in the 1980s, some very dark times came to North Vermont Avenue. In early October 1985 Luigi Uzzauto – the owner of Luigi’s, another popular Italian restaurant virtually opposite Sarno’s (it’s now Public House) – shot a waitress with whom he had been having an affair, and then turned the gun on himself.

A couple of years later in October 1987, Alberto himself was shot in his front doorway just minutes after closing up the restaurant for the night. Robbery didn’t seem to be the motive – he still had over $200 in his pocket – and for a while Police and locals alike were mystified.

Then there was a break in the case, when a waitress Alberto had recently hired, Krysteen Ann Ackerman, was arrested for petty theft and told Police a story about how her boyfriend’s brother Ralph Mora had bailed her out of jail recently.

He wanted to be paid back what he was owed and apparently suggested Ackerman could rob her boss, and though she dismissed the idea and paid him the money, when they started using drugs together he kept asking questions about Alberto’s life and routine.

You can see where this is going, and it was later alleged that Mora’s accomplice, Robert Lopez, was the one who shot Alberto during the robbery, though it was only Mora who faced solid evidence against him – and when he was acquitted in a second trial after the first ended in a hung jury, the murder of Alberto remained officially unsolved.

Alberto’s devastated widow Silvana kept Caffe dell’Opera open until 1992, hanging a big oil painting of her husband on the wall, and Dino and his daughters continued Sarno’s Bakery until 2000, when the family put up a sign that read:

“Thank you Los Angeles for 54 years. We are closing our doors for retirement. Buona Fortuna!”

For a few years the restaurant was open under the name Vermont, and in 2009 it became Rockwell’s – where it’s still a place for music and song of all kinds, including occasional jazzy appearances by Jeff Goldblum (Jurassic Park, Independence Day: Resurgence) and the Mildred Snitzer Orchestra.

Alberto’s café is long gone, though many of the staff say that his love of music was so strong he has probably never gone away – and back in 1989 in the LA Times, Silvana said the same:

“Alberto’s still here because I keep him alive. He belongs here. This is still his place.”